A Lesson in Time Frame Diversification

In recent months and years, the investment industry has been full of wild opinions and everyone seems to be a self-proclaimed soothsayer. So it’s easy, for example, to find predictions for gold to reach $10,000 per ounce, or treasury yields to explode upwards and for the United States to go the way of Greece, or Apple to reach $1 trillion market cap, or the euro to lose its European backers and disband as a currency. Now there’s nothing wrong with so many wide opinions since bringing together every opinion and prediction is what helps make a market a market; and you could almost say that in their simplest form the financial markets are nothing more than monetized opinions and predictions. All these opinions, however, can have an overloading, paralyzing effect on the average investor, especially if an opinion is sound but has been losing performance-wise against the markets (gold’s recent 6-month sideways performance versus the rising S&P 500 is a good example, as is the fact that being short the euro year-to-date has lost money).  So because so many opinions abound, which may someday be profitable opinions but are oftentimes money-losers in the short-term versus the markets, I find time frame diversification investing tactics to be useful.
Everyone knows about the importance of asset diversification in a portfolio but very few consider the importance of time frame diversification. Time frame diversification, put simply, means adding in assets that you think will out-perform in the short-term, another batch of assets that you think will out-perform in the intermediate-term and another batch you think will out-perform in the long-term.  Basically, short-term investors should not let long-term time frame-based opinions sway their short-term decisions and long-term investors should not let short-term opinions sway the timing of those positions.

An example of a current short-term (1 week to 3 months) long position could be in the price of the Natural Gas commodity.  One could look at the performance of an ETF that tracks the price of U.S. Natural Gas, (NYSEArca: UNG) which is now trading close to $16 because it has been in a down-trend price decline since 2008. (See left) Recently, the media has really made a big deal about its new lows (usually a contradictory signal) and yet UNG has bounced 15% from its recent low set 2 weeks ago.  (See below) 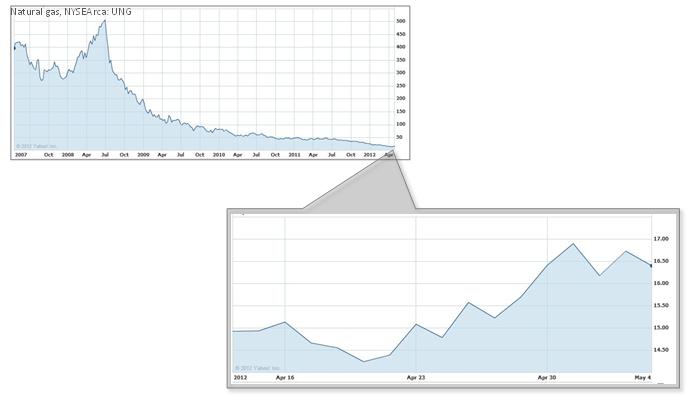 Focusing on how a short-term position, like UNG, acts during just the short-term time period removes all the ‘noise’ about how it has vastly under-performed most assets in the long-term. Furthermore, there’s no fundamental questions lingering in the head of the investor as to if natural gas and UNG will one day reach its prior 2008 price peaks. All that matters is how it reacts versus the markets right now. Typically, I would consider short-term positions to be those which would be affected most by short-term news events like quarterly earnings or media reports and I would likely only hold them between 1 week to 3 months.

A current example of an intermediate-term (3-12 months) position could be gold.

As seen in the chart above, during gold’s historic rise it has often-times had consolidating periods where it overall moves sideways for months before rising higher than before.  No clues can really be drawn in the short-term on gold, and while it may perform well in the long-term (defined here as over 1 year) there’s not much evidence one can gather to back that up, especially since it has now closed higher for 11 years in a row and might be due for a multi-year pullback.  However, in the short-term we do know that gold out-performed the markets during Congress’ debt limit fiasco last July and August. According to some US Treasury-watchers, the US might hit the debt limit later this year which could cause gold to have another strong rally. (1)  Furthermore, central banks around the world are still big net buyers of gold.  According to the World Gold Council, central banks bought 439 tons in 2011, the most in 5 decades, and the World Gold Council predicts this year will be a similar amount. (2)

An example of a long-term position could be emerging market equities and bonds. The long-term fundamental anchor in place for emerging economics is seen through the growing emergence and economic prosperity of the middle-class.  In terms of finding long-term positions, the main requirement is a fundamental anchor of growth that can mainly be slowed by sudden global financial instability, as seen in 1997, 1998 and in 2008, or bubble-like growth, as seen in emerging markets from 2006 to 2008 or like the late 90’s tech bubble.

Overall, time frame diversification should play an important role when structuring a tactically managed portfolio.  We believe that an investor, in order to be consistently successful in the markets, has to focus on short, intermediate and long-term prospects.  This is because focusing on one time frame alone can allow opposing opinions, which are based on different time frames than your own, to cloud judgment and cause confusion.  However, by having a group of investments focused just on short-term performance, another group focused on intermediate-term performance and another focused on long-term performance allows the investor to filter out the unnecessary noise and to focus on achieving overall positive market performance across all time frames.

Opinions expressed are not meant to provide legal, tax, or other professional advice or recommendations.  Investing involves risk, including the possible loss of principal.  There are additional risks associated with investing in Gold or other commodities.  The S&P 500 index is an unmanaged market capitalization weighted price index composed of 500 widely held common stocks listed on the New York Stock Exchange, American Stock Exchange and Over-The-Counter market.  The value of the index varies with the aggregate value of the common equity of each of the 500 companies.  The S&P 500 cannot be purchased directly by investors.   All opinions and views constitute our judgment as of the date of writing and are subject to change at any time without notice.  Investors should consider the investment objectives, risks, charges and expenses of the underlying funds that make up the model portfolios carefully before investing.  The ADV Part II document should be read carefully before investing.  Weatherstone Capital Management is an SEC Registered Investment Advisor located in Denver, Colorado.  Past performance does not guarantee future results.