It wasn’t another 12th hour debt ceiling debate or the conflict in Eastern Europe that brought the largest market correction to the S&P 500 in over a year last month, but it was the increased risk of an emerging market currency crisis. The recent developments in a number of emerging market currencies have brought back fears of a repeat of the Asian currency and financial crises which ultimately lead to a Russian sovereign debt default in 1998. So far the current rout in currencies has been isolated to only a select few developing nations. However, the Asian currency crisis showed us that contagion can catch on in a hurry and can be very difficult to contain. The crisis also showed us that although there can be dire consequences for troubled countries during a currency crisis, countries who have their financial house in order can weather the storm.

The subject of currency alone can be difficult to grasp, so understanding how and why a currency crisis unfolds can be a challenge to say the least. Basically, during the 1990’s there was a big push by East Asian nations for economic development. To do this, the public sector pushed the private sector to maintain high levels of economic growth. A number of strategies were used such as the public sector supporting private sector projects with loan guarantees and subsidies. The public support coupled with a scaling back of government oversight lead to an increase in the number of riskier and costlier projects. According to a National Bureau of Economic Research study, “In Korea, 20 of the largest 30 conglomerates displayed in 1996 a rate of return on invested capital below the cost of capital.” (1) In other words, two-thirds of the largest companies in Korea were not profitable. Furthermore, during the 1990’s financial market deregulation and other liberties caused an influx in foreign investment into regions such as East Asia.

Foreign investors are the worst kind of investors for a domestic company since they have no skin in the game except for their capital. As a result, at the first hint of trouble these investors pulled their investments. Since the foreign investment was denominated in the local currency the investor had to exchange out the local currency for their own domestic currency or the currency of another country they were willing to invest in. During this time, these countries were ill-equipped to defend a fall out in their currency and the speculative investors exacerbated the declines. As seen in the chart below, over the course of the crisis the troubled countries saw a significant decline in their equity indexes. 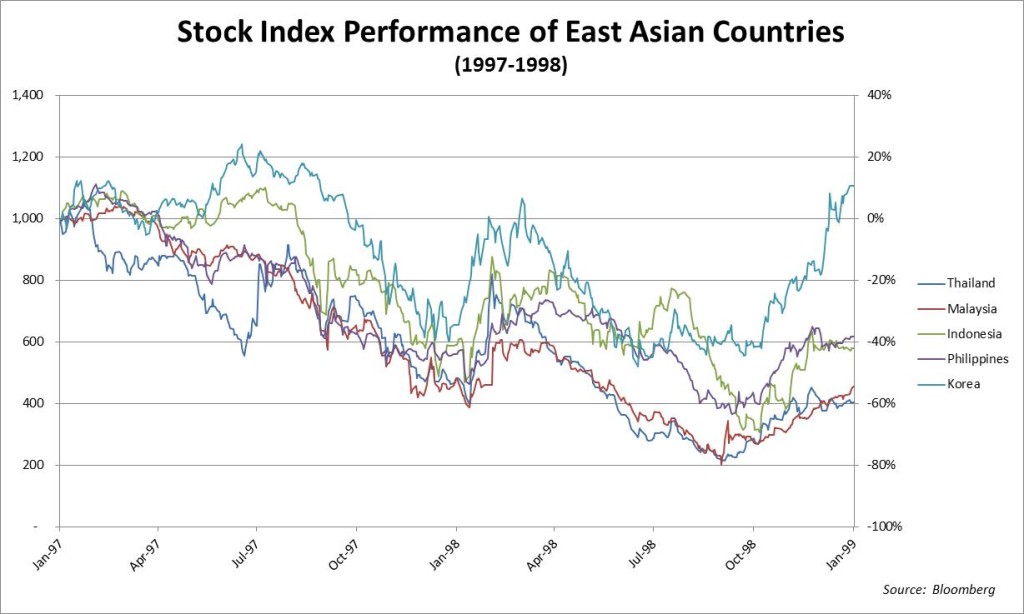 One might wonder how a country such as Russia can be affected by a crisis in East Asia. After the fall of the Soviet Union, Russia had appeared to be on course for growth and financial stability. However, after some missteps by the Russian government and central bank, the Ruble began to decline as investors pulled their investments in late 1997 and the central bank of Russia was unable to effectively defend the ruble. Eventually, Russia devalued the ruble and defaulted on its domestic debt in August of 1998. This example shows how a country that does not have its house in order can be caught up in contagion during a crisis. On the other side of the coin is the U.S. During this period, the U.S. was running a balanced budget and even budget surpluses, and both economic growth and the dollar were strong. You can see from the chart below that the U.S. did not experience a long lasting fall out during the currency crisis. 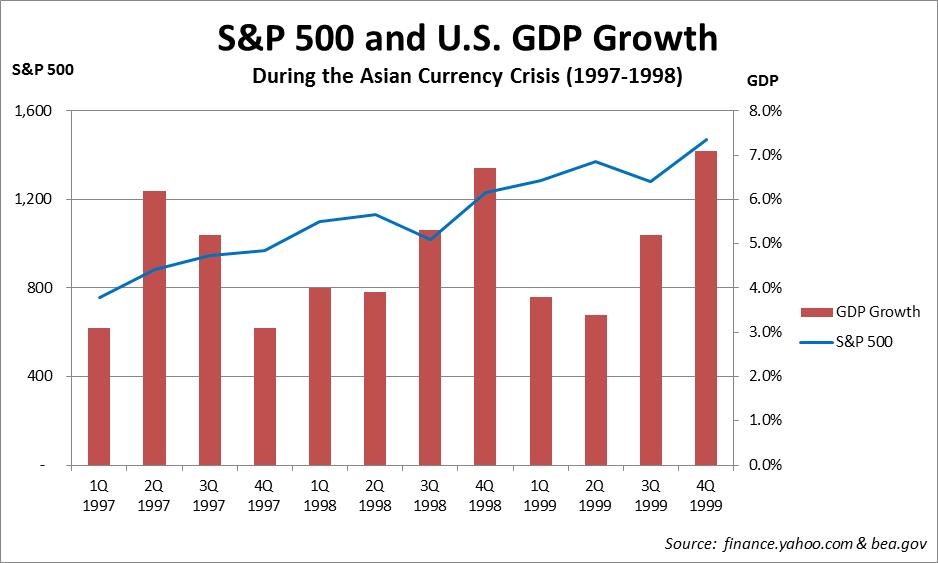 Unlike the Asian crisis in the 1990’s the current emerging market turmoil is being caused by the tightening of monetary policy in the U.S. and slower than expected global growth. Emerging market exchange traded funds (ETFs) have seen a net outflow eleven out of the past thirteen months (2). Furthermore, the MSCI Emerging Markets ETF experienced its largest monthly outflow in January since the ETF was created in 2005 (3). The rout in emerging markets began when the Federal Reserve (Fed) started to hint at tapering in early 2013 and picked up steam when it followed suit with its first tapering of bond buying in December. As a result of the Fed’s easy monetary policy over the past few years, excess liquidity made it possible for investors to borrow U.S. dollars at very low rates and invest them overseas. As investors prepare for higher rates in the U.S. and as emerging economies growth prospects continue to disappoint, they are selling their foreign investments and converting their currencies back to U.S. dollars where they can expect a higher risk adjusted return.Throughout this repositioning , countries that are not well positioned for an exodus of foreign investors are having trouble defending a selloff in their currency.

Much like the Asian currency crisis during the 1990’s the current rout in currencies remains isolated to a select few developing countries. The most troubled countries are Argentina, Indonesia, Turkey, Hungary, and South Africa. Some of the more severe routs in currencies were seen in Argentina and Turkey. In late January, the Argentine peso lost more than 12% of its value in a single trading day and the Turkish lira hit an all time low after seven consecutive days of losses (4). Central banks have a number of tools at their disposal to try and and combat devaluations of their currency. One tool is to raise interest rates which will attract investors by offering a greater return on investments denominated in the local currency. Turkey did just that in an emergency meeting following the seven day rout in its currency and raised its overnight rate from 7.75% to 12% (5). However, this can be a double edged sword since large rate moves such as this can cause disruption to its financial system and higher rates can slow an already unstable economy.

Although many would argue that the U.S. is far from having its financial house in order, it is still the “cleanest dirty shirt” out there and if the current storm brewing in emerging markets becomes much larger, it should weather through it fairly well. Only after the Russian default did the U.S. suffer any significant losses to its equity markets when the S&P 500 dropped nearly 20% in the 3rd quarter of 1998 and remained resilient as it reached new highs by year-end of 1998 (6). Although U.S. equity valuations remain relatively high, it should continue to a preferred place for investors to park their cash. Attractive segments within the U.S. economy will be companies without a strong multi-national presence and those who benefit from a stronger dollar. Volatility will more than likely continue throughout the remainder of 2014 as investors continue to position their portfolios for tighter monetary policy and slower than expected global growth prospects. We remain cautious on emerging markets in the short-term however, valuations are becoming attractive and we will continue to monitor the severity of the fallout in emerging markets since an opportunity may be upon us soon.

Disclosure: Opinions expressed are not meant to provide legal, tax, or other professional advice or recommendations. All information has been prepared solely for informational purposes, and is not an offer to buy or sell, or a solicitation of an offer to buy or sell, any securities or instrument or to participate in any particular trading strategy. Investing involves risk, including the possible loss of principal. All opinions and views constitute our judgment as of the date of writing and are subject to change at any time without notice. Investors should consider the investment objectives, risks, charges and expenses of the underlying funds that make up the model portfolios carefully before investing. The ADV Part II document should be read carefully before investing. Please contact a licensed advisor working with Weatherstone to obtain a current copy. The S&P 500 Index is an unmanaged market capitalization weighted price index composed of 500 widely held common stocks listed on the New York Stock Exchange, American Stock Exchange and Over-The-Counter market. Indexes are provided exclusively for comparison purposes only and to provide general information regarding financial markets. This should not be used as a comparison of managed accounts or suitability of investor’s current investment strategies. If the reader has any question regarding suitability or applicability of any specific issue discussed above, he/she is encouraged to consult with their licensed investment professional. The value of the index varies with the aggregate value of the common equity of each of the 500 companies. The S&P 500 cannot be purchased directly by investors. This index represents asset types which are subject to risk, including loss of principal. Weatherstone Capital Management is an SEC Registered Investment Advisor with the U.S. Securities and Exchange Commission (SEC) under the Investment Advisers Act of 1940. Weatherstone Capital Management is not affiliated with any broker/dealer, and works with several broker/dealers to distribute its products and services. Past performance does not guarantee future results.