The problems of sovereign debt in Europe have been going on for nearly two years when Greece first emerged as a serious problem in the spring of 2010 and then Ireland later in the year.  Since that time, we have seen Portugal, Spain and Italy all come into the glaring spotlight of scrutiny for the problems their respective countries are having in getting their financial house in order and putting plans in place to keep their debt under control.  As confidence fades in the ability of these countries to get their problems under control, the interest rates on their government bonds are increasing and the increased costs of funding the debt just compounds the problem.  For smaller countries, such as Ireland and Greece, financial bailout programs have helped to buy time to get their financial houses in order, although it still remains to be seen whether the programs will ultimately be successful.  However, when it comes to larger countries, such as Italy and for the European Union as a whole, a loss of confidence by investors in the ability to get back on a fiscally prudent path and to maintain the core of the European Union could lead to a large-scale financial crisis similar to what we saw in 2008.  There are some troubling signs that the risk of such an event are increasing.

The first warning sign of increasing financial stress is the unwillingness of banks to lend to each other as evidenced by the large amount of borrowings by commercial banks from the European Central Bank in recent weeks after it opened a new lending program because banks were having a difficult time getting funding from investors or by borrowing money from other banks and, as noted in the chart below, which shows the rising cost of borrowing money from other banks.  While the level is below that of 2008, it is higher than when the crisis first erupted in 2010 and is steadily rising. 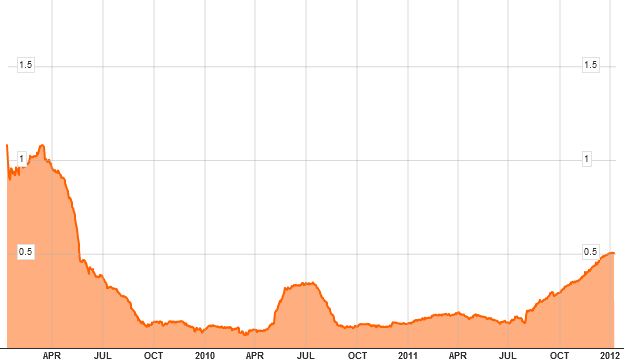 In conjunction with the rising cost for banks to borrow from one another in a very low interest rate environment is the historic fact of negative interest rates in safe haven countries.  This essentially means that you are paying the government to take your money and give you less in the future.  For a bit of historical perspective, consider that in the United States during the past 100 years before the financial crisis of 2008, the only time that there was a negative interest rate on US Government bonds was for a brief period during World War II.  We are currently seeing interest rates at zero or slightly negative for 1-2 month Treasury Bills in the United States and in Europe where Germany is considered the financially safest country, yields on German government debt are negative for maturities of up to one year.  This is virtually impossible to imagine in any normal investment environment. 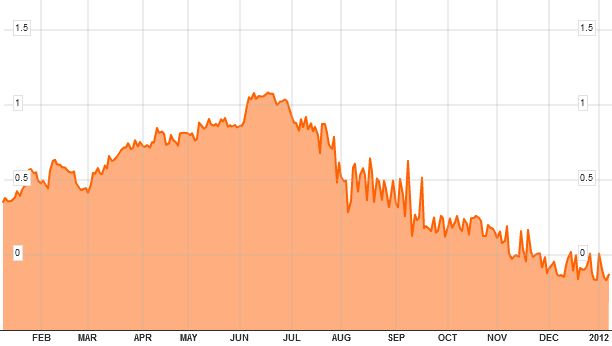 If there is a risk that the Euro currency may not survive the financial crisis, then you would expect that people would want to move out of the Euro and into other currencies that are perceived as being more stable.  When we look at the decline of the Euro to 16 month lows vs. the US Dollar and 11 year lows vs. the Japanese Yen, and we see the pace of that decline picking up steam, it is particularly troubling. 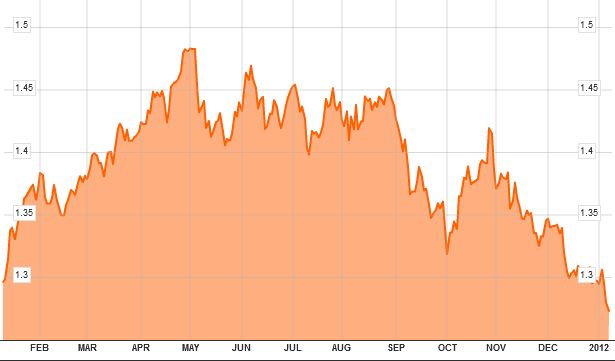 Source:  Bloomberg (3)
We have talked in past commentaries, as well as in the current quarterly newsletter that will be going out with statements later this month, about the importance of watching the yields on government bonds from the most economically troubled countries in the Eurozone (Greece, Ireland, Italy, Spain and Portugal).  Of all these countries, I feel that the yields in Italy are the most important to watch due to the relative size of Italy to that of the troubled group and because of the significant amount of debt that is coming up for refinancing in February, March, and April of 2012.  Yields on long-term Italian debt has risen above 7% and have caused markets to begin panicking as this is the level at which other countries have needed to ask for financial assistance from the larger European countries in order to buy time to get their fiscal problems resolved.  The concern is that with Italy being the 3rd largest economy in the Eurozone, they are too large to bailout.  With a change in the Italian government already having been made and with only a few short weeks until the larger bond refunding’s will begin, this is a troubling sign. 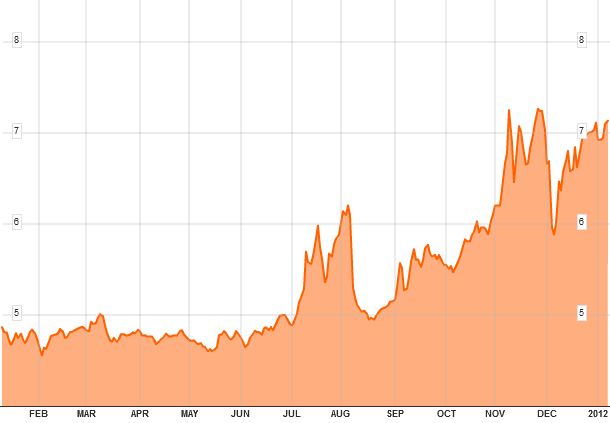 Finally, we look at the challenges that the region has from a slowing economy.  As banks have been under increased pressure from the difficulty of raising additional funds, they have cut back on lending and loan renewals in many regions.  This in turn has caused the Eurozone economy to slow and to show signs that it may be moving into recession.  The chart below shows the Eurozone Purchasing Managers Index, which while not reaching the levels seen in 2008, has still deteriorated to levels typically associated with a recession. 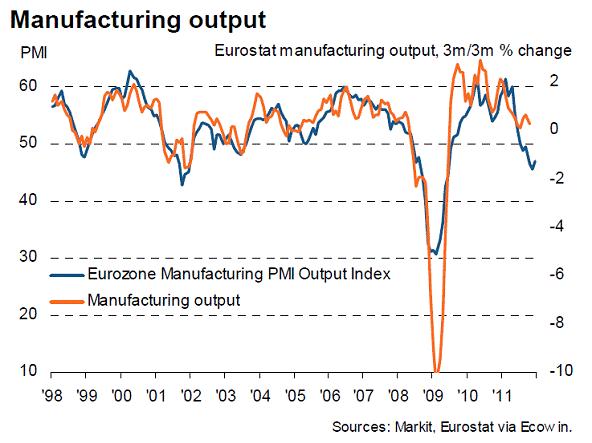 Given the anemic level of economic recovery going on in the United States and in other parts of the world, an expanding vortex of the credit crisis coupled with a Eurozone recession has the potential to pull us back into another recession.  The risks are high enough that we need to watch the situation closely and exercise additional caution.

Disclosure
Information provided comes from independent sources believed reliable, but accuracy is not guaranteed and has not been independently verified.  The opinions expressed are those of the portfolio management at Weatherstone Capital Management and not to be construed as investment advice or offer to buy/sell a security, or a solicitation which should only be provided by a qualified financial advisor prior to entering into any investment that involves risk.  Investment decisions should be made based on investor’s specific financial needs, objectives, goals and time horizon.  All opinions and views constitute our judgment as of the date of writing and are subject to change at any time without notice.  Past performance does not guarantee future results.