The most recent monetary policy move by Japan to double their monetary base over the next two years is an “all-in” effort to rid the country of over a decade of deflation.  Similar to the U.S. 2008 financial crisis, in the early 1990’s Japan experienced an asset bubble which they still have recovered from.  Since 1994, Japan has achieved annual inflation of 1% or more just once (1).  So when Japan’s central bank predicted that it would achieve inflation of 2% by 2015, is at minimum a very lofty goal.  Although the subject of monetary and currency policy is complex and can be difficult to grasp, Japan’s actions over the next couple of years will make its mark in financial history.

When a country expands their monetary base, it means that they are supplying more currency to be circulated around in the economy and in Japan’s case will hopefully increase inflation.  To understand the concept, we will look at the U.S. dollar as an example.  For sake of simplicity, let’s say that the U.S. only produces 100 widgets and that there is only $100 in currency.  This means the average price for each widget should be around $1.  If the U.S. dropped 100 additional dollar bills out of a helicopter and it still produced only 100 widgets than all else equal, the average price per widget should increase to $2.  The increase in the average price per widget is inflation and was a direct result from the increase in the monetary base.  For an accurate representation of a country’s monetary base you need to take the amount of currency as a percent of its gross domestic product (GDP).  Below is a chart which shows a projection of Japan’s monetary base relative to 2015 GDP.  I also gave Japan the the benefit of the doubt by projecting GDP growth of 2% over the next two years.  All three economies have been struggling with slow growth and have significantly increased their monetary bases since 2005 but the magnitude of Japan’s move is remarkable. 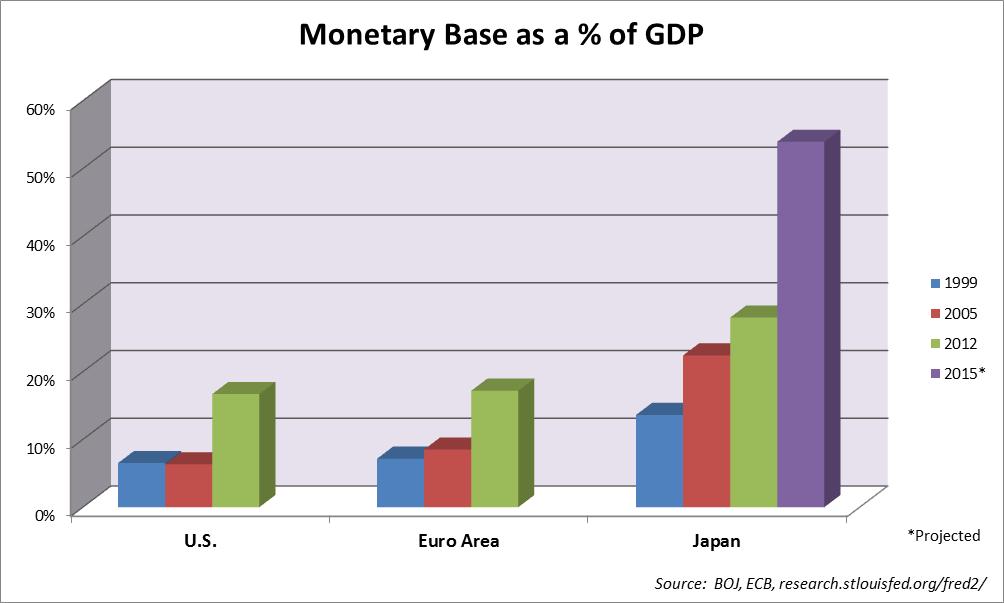 So far, Japan’s currency easing is paying off in the form of Japan’s Nikkei stock index which is up over 40% year-to-date (2).  Many Japanese export companies, such as Sony and Mazda are up over 60% and have been a major contributor to the stock index surge (3).  The Yen (¥) has depreciated nearly 15% since the first of the year and does not appear to be stopping anytime soon (3).  A fall in the exchange rate from ¥87/USD to ¥100/USD (15% change) lowers the price of a car manufactured in Japan and sold in the U.S. from $30,000 to $25,500.  Although many investors assume Japan is a large exporting country, exports accounted for less than 20% of GDP in 2012, which places it among the lower end of the world rankings (4).

With a debt-to-GDP ratio approaching 250%, Japan currently has the largest deficit of any other developed country.  If inflation does take hold in the island nation, it could bode well for paying down its massive deficit.  To put it simply, Japan would “inflate away” their debt.  Let’s look at an example of how this could be achieved by assuming they do achieve the 2% inflation by 2015 and that their debt-to-GDP ratio is only 100%.

Assume the debt level remains stable and GDP grows by the 2% inflation rate.

You can see that since the debt was all issued prior to the inflation increase that the principal amount that the government needs to repay remains stagnant.  In addition, you can see that both GDP and tax receipts increase at the rate of inflation which will be a twofold way to reduce the debt-to-GDP ratio.  Someone does lose in this scenario and it will be the Japanese bondholder.  If the Japanese bondholder loses confidence in their country’s future, they will begin to dump Japanese bonds which will create further downward pressure on the Yen.

One area that will bode well for Japanese citizens’ confidence in their country’s future is wage inflation.  As you can see from the chart below, Japan has failed to sustain wage inflation since 1990.  The biggest fear is that they will achieve inflation but it will be in all the wrong places.  One area where this is already taking place is in the form of higher energy costs.  Ever since the Fukushima nuclear disaster, Japan has had to rely even more on foreign sources of energy and currently imports roughly 84% of their energy needs (5).  As the Yen devalues relative to other currencies, the price they pay to import energy will increase.  In March, Japan’s utility companies announced that they will increase utility prices charged to commercial users by double digits.  In addition, two utility companies announced earlier this month that they will be raising prices for households for the first time in over 33 years (6).  As Japanese companies begin to deal with higher input costs it will be difficult to raise wages at the same time. 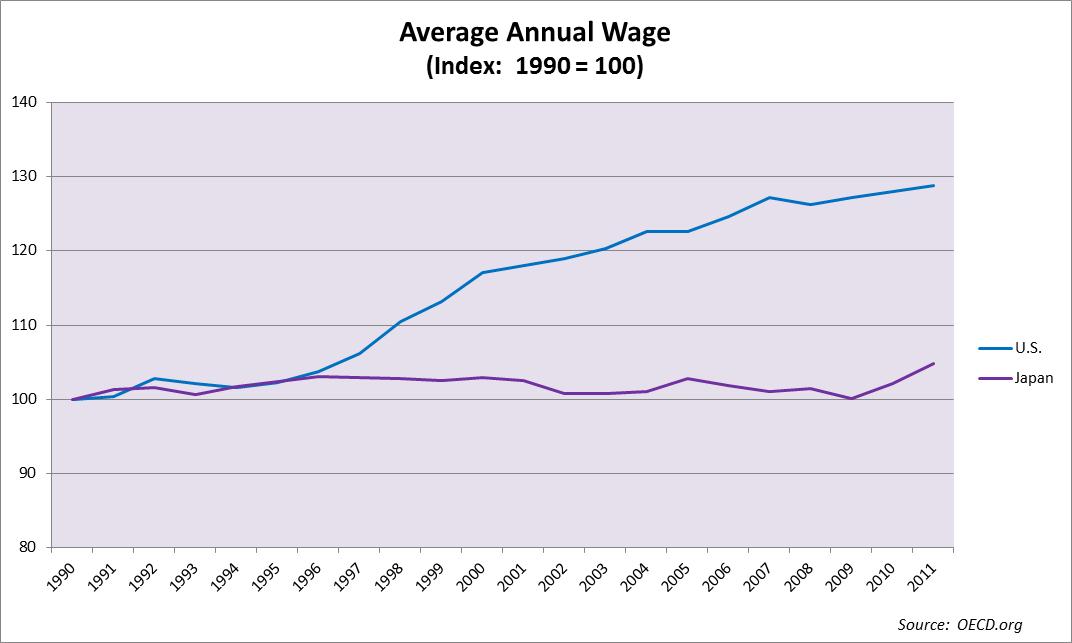 For the time being the historic monetary expansion has and will continue to create investment opportunities in Japanese export companies.  However, if Japanese bondholders begin to dump bonds it could have ripple effects throughout the global bond markets.  In addition, there is a small probability that the “all-in” approach could induce hyperinflation which could send equity and bond markets around the world into a state of disarray.  As we enter into the 5th year of the current bull market, investors are starting to feel a sense of complacency.  However, hanging over investor’s heads is the thought that there is a chance of a black swan event like hyperinflation in the third largest economy.  As global markets begin to enter these unchartered territories, tactical money management will serve as a powerful tool to guard against the increased risk.

Disclosure:  Opinions expressed are not meant to provide legal, tax, or other professional advice or recommendations. All information has been prepared solely for informational purposes, and is not an offer to buy or sell, or a solicitation of an offer to buy or sell, any securities or instrument or to participate in any particular trading strategy.  Investing involves risk, including the possible loss of principal.   The S&P 500 Index is an unmanaged market capitalization weighted price index composed of 500 widely held common stocks listed on the New York Stock Exchange, American Stock Exchange and Over-The-Counter market.  The value of the index varies with the aggregate value of the common equity of each of the 500 companies.  The S&P 500 cannot be purchased directly by investors.  This index represents asset types which are subject to risk, including loss of principal.  This index cannot be directly invested in.  All opinions and views constitute our judgment as of the date of writing and are subject to change at any time without notice.  Investors should consider the investment objectives, risks, charges and expenses of the underlying funds that make up the model portfolios carefully before investing.  The ADV Part II document should be read carefully before investing.  Please contact a licensed advisor working with Weatherstone to obtain a current copy.  Weatherstone Capital Management is an SEC Registered Investment Advisor with the U.S. Securities and Exchange Commission (SEC) under the Investment Advisers Act of 1940.  Weatherstone Capital Management is not affiliated with any broker/dealer, and works with several broker/dealers to distribute its products and services.  Past performance does not guarantee future results.