In our January market insight, Michael Ball, Lead Portfolio Manager addressed the topic of how international markets have underperformed the U.S. since 2010.  In addition, Michael pointed out how the U.S. was currently valued very close to its historical median valuation while other countries are significantly undervalued.  Rightfully so, sitting near the bottom of the undervalued list are all the troubled European countries.  Also near the bottom of the list is the largest Latin American economy, Brazil.  In fact, Brazil is ranked worse than three of the five European problem countries Ireland, Spain, and Italy and is subsequently followed by the remaining two, Portugal and Greece.  When valuations are driven down to levels as low as we are seeing today, it is only a matter of time before some short-term momentum will begin to make a country look attractive.  This scenario is beginning to unfold within our programs as you begin to see new and increased exposure to regions such as Europe and emerging markets.

The valuation metric referred to in the first paragraph is the price-to-earnings ratio, commonly referred to as the P/E ratio.  It is one of the most commonly used valuation metrics within the investment management industry.  Simply put, the numerator (price) is based on what you would pay today for the future earnings of an investment.  The denominator (earnings) is usually based on historical earnings and in this case, the 10-year average inflation-adjusted earnings.  A good indicator of a country’s stock index earnings is the gross domestic product (GDP) for that country.  From the chart below, you can see that Brazil’s nominal GDP has increased significantly since 2000.  This growth in GDP is being reflected within the denominator for the P/E ratio for Brazil.  As I stated earlier, the numerator is based on price, and price is determined by what an investment offers in the FUTURE, not the past.  When an investment is beat up and valuations are driven down it is usually for good reason. 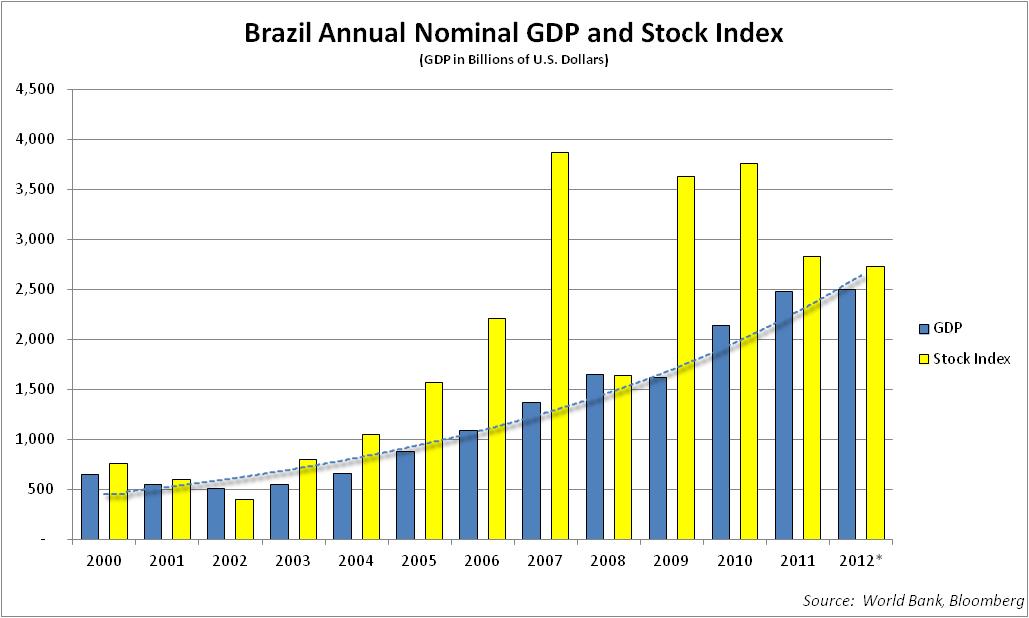 The troubled European countries are a good example of how a country’s stock index can be driven down as the result of a major event such as the sovereign debt crisis.  In other cases, the justification for a low valuation may not be as visible on the surface.  For example, Japan is challenged with deflation and an aging demographic while China, who has seen such large growth over the past decade that even a sub-8% growth rate will cause investors to pull back (1).  In Brazil’s case, many investors are concerned with Brazil’s short-term growth prospects, inflation and an appreciating currency.  The current consensus for 2012 GDP growth in Brazil is a miniscule 1% (1).  Additionally, analyst projections are calling for another lackluster year in 2013.  In addition, although 2012 inflation was lower than 2011, 5.40% is much higher than the central bank’s target inflation rate of 4.50% (5). The renewed concern about inflation and the current expansionary policy in the U.S. has caused Brazil’s currency, the real to increase to a 9-month high versus the U.S. dollar (6).  This is especially harmful for companies engaged in exporting goods.

The example of Brazil shows that although growth has been significant over the past decade, that is the past, and investors are concerned about the future.  If Brazil can stave off an inflationary environment, it is in a position to experience renewed economic growth over the next few years.  The unemployment rate just dropped to 4.6% in December, the lowest level on record (8).  In addition, domestic consumption has steadily increased over the years and has become a much larger portion of its overall economy.  In addition, Brazil has proven that it can withstand a global financial crisis by using aggressive counter-cyclical monetary and fiscal tools at its disposal.  At the current valuation level, coupled with the recent relative momentum in Brazil’s stock market performance, investor pessimism will deteriorate.

At Weatherstone, we use a range of models that span across all investable countries and regions.  The example portrayed above closely relates to our momentum based models.  Absent one month in early 2012, the model used for Latin America accurately avoided buying into Brazil for all months since early 2010.  However, the relative momentum that Brazil has exhibited over the past 6-8 months relative to its Latin American counterparts is becoming more apparent in the model.  A buy signal for Brazil small caps in January reinforced this growing momentum.  Although it has since moved away from Brazil, we expect additional buy signals for Brazil as we move through 2013.  As I stated earlier, Brazil is just one example of how a country that has been underperforming can suddenely begin to pick up momentum and as a result become a portion of the portfolios that have international exposure.  Other countries and regions where this scenario has already played out and are being reflected within our portfolios include Europe and emerging Asian countries.

Onions expressed are not meant to provide legal, tax, or other professional advice or recommendations. All information has been prepared solely for informational purposes, and is not an offer to buy or sell, or a solicitation of an offer to buy or sell, any securities or instrument or to participate in any particular trading strategy.  Investing involves risk, including the possible loss of principal.  Foreign investments are subject to risks including political and economic instability, inflation, deflation or currency devaluation and government limitations.  All opinions and views constitute our judgment as of the date of writing and are subject to change at any time without notice.  Investors should consider the investment objectives, risks, charges and expenses of the underlying funds that make up the model portfolios carefully before investing.  The ADV Part II document should be read carefully before investing.  Please contact a licensed advisor working with Weatherstone to obtain a current copy.  Weatherstone Capital Management is an SEC Registered Investment Advisor with the U.S. Securities and Exchange Commission (SEC) under the Investment Advisers Act of 1940.  Weatherstone Capital Management is not affiliated with any broker/dealer, and works with several broker/dealers to distribute its products and services.  Past performance does not guarantee future results.