It has been said that content is not helpful without context, and at this time I felt it would be useful to put the continued advance of the stock market into historical context so that we can determine if stocks are likely to continue moving higher for an extended period of time, or if we are in the final stages of a bull market, and a bear market may be closer than we may think.  To provide some context we will briefly look at a few key areas that will likely influence the path of the markets over the next 2-3 years.

Actuarial
One of the factors that we look at when evaluating the stock market is the extent of the current advance or decline relative to past advances and declines.  As shown in the chart below, when comparing the length of time since the last 20% decline, the current advance is looking to be in the later stages based upon past market history going back into the 1920’s.  While the length of an advance in the stock market in itself is not a reason for the stock market to go down, the chart illustrates that the likelihood a stock market advance continuing much beyond 4 years is quite low.  You can see that only two other times the Dow Jones Industrial Average extended beyond the six year threshold. 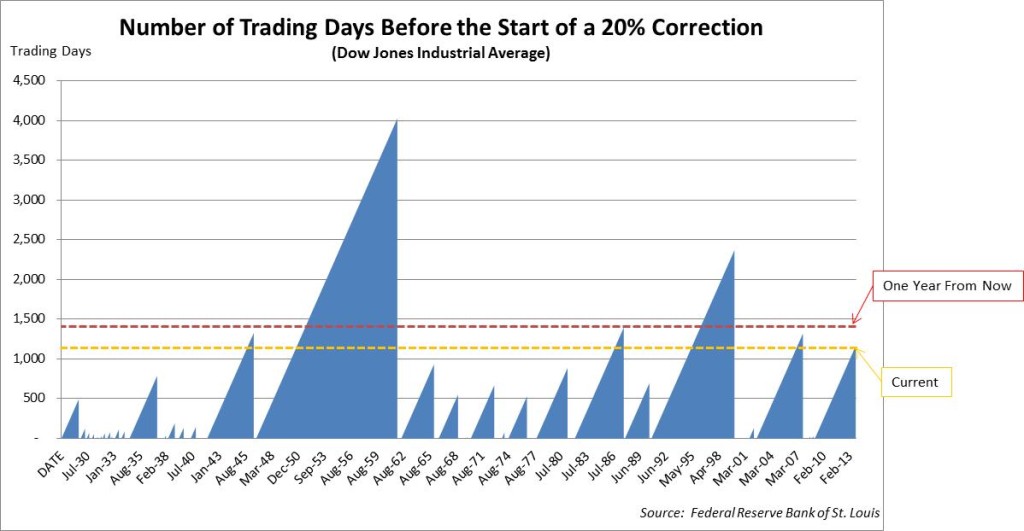 Economic
The stock market is reflective of the underlying economy, but it is typically reflecting the expected state of the economy in the coming quarters, not necessarily what is happening today.  That is one of the reasons that the stock market is included as one of the components in the Index of Leading Economic Indicators (LEI).  The economic recovery coming out of the financial crisis has been quite slow both domestically and abroad, as a result we are still struggling to recoup all of the domestic jobs lost during the recession, Europe slid back into a recession last year, and as recently as May the Eurozone hit a record unemployment rate(1) of 12.2% and it has only down ticked slightly to 12% currently.

In an effort to do what they can to stimulate economic growth, Central Banks from around the world have cut interest rates to near zero levels and implemented many types of “non-standard” programs such as quantitative easing in an effort to further stimulate economic growth.  The fact that nearly four years into our economic recovery the Federal Reserve is unable to wrap up the quantitative easing programs or raise interest rates indicates how tepid the economic recovery has been.  But more importantly, it highlights how vulnerable the economy is should a new economic challenge or crisis arise.  The stock market is currently pricing in a significant pickup in corporate earnings and continued strong profit margins in the coming quarters, but if the corporate earnings from the past few quarters are any indication, those earnings are unlikely to be as strong as expected.  The weak economic growth and lack of room to cut interest rates or provide significant support to the economy should a new economic crisis arise is negative for the markets.

Valuation
An additional factor that impacts whether your investment returns are likely to be above or below average over the coming decade is whether you are buying stocks at high or low valuations.  As the chart below shows, over the past 65 years, there has been a long-term benefit to buying stocks when they are “cheap” on a historical basis rather than when they are “expensive”.  We have been in the 8th decile and are close to the 9th which has the second lowest return going out over the next ten years.  As a result, above-average valuations are also a negative for the stock market at this point. 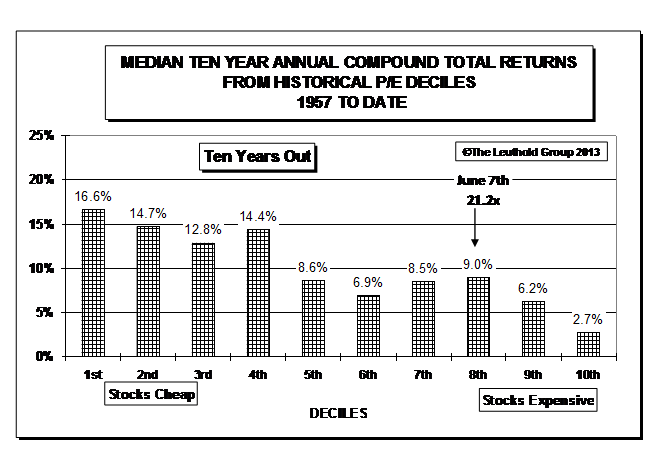 Interest Rates
Interest rates, particularly short-term interest rates have been an important driver in the current bull market as the near-zero returns of money market funds and CD’s has pushed many investors to move into stocks due to the lack of other compelling investment opportunities.  One of the stated aims of the Federal Reserve’s Quantitative Easing program has been to push people out of cash and into riskier assets such as stocks in an effort to create a “wealth effect” that should benefit the economy.  While it has helped to provide a lift to stock prices, there is realistically no additional room to cut rates, and in the future as short-term rates begin to return to more normal levels, this will become a headwind for stocks, but currently it is a strong positive for the stock market.

In Summary
The stock market is moderately expensive; the advance has grown quite long by historical standards, and interest rates have begun to inch up modestly on intermediate and longer-term bonds, but remain stable for money market funds.  As a result, the headwinds for stocks are increasing.  Currently the most favorable factors impacting the stock market are a stable economy, subdued inflation and an increasing flow of money as some of the cash flows that have been moving into bonds in recent years are increasingly being redirected to stocks.  With Europe emerging from recession more quickly than expected, a reasonably stable economic backdrop, and low interest rates, it is reasonable that stocks will continue to move higher due to a lack of other compelling alternatives and the absence of economic crisis’s, but risk is above-average and there remain uncomfortable similarities to the 2006-2007 time period.

Portfolio Activity
During the 3rd quarter we saw stocks experience a strong month in July as markets rebounded from the May-June decline, and then August gave us the largest one-month drop for stocks in more than a year.  September turned in a solid performance during what is historically the weakest month of the year for stocks.  Despite the volatility during the quarter, stocks ended higher and bonds mixed, with most treasuries slightly lower for the quarter, and most corporate bonds slightly higher.

Most equity portfolios saw cash levels remain above-average as several of the risk measurement models deteriorated due to the increasing volatility in foreign and domestic markets and weakness in the bond markets.  However, as we moved into the 4th quarter the equity portfolios began to reduce cash positions and once again add to equities based upon the recent stabilization in interest rates and unexpectedly good news out of Europe as the Eurozone region emerged from recession earlier than most economists had predicted.

In the bond portfolios, we reduced positions in high yield and emerging market bonds as interest rates trended higher for most of the quarter, before stabilizing late in September.  Bond allocations remain focused on short-duration and corporate bonds over treasury bonds, and in some portfolios we eliminated exposure to utilities and high dividend-paying stocks and replaced the positions with exposure to convertible bonds.

Disclosure:  Opinions expressed are not meant to provide legal, tax, or other professional advice or recommendations. All information has been prepared solely for informational purposes, and is not an offer to buy or sell, or a solicitation of an offer to buy or sell, any securities or instrument or to participate in any particular trading strategy.  Investing involves risk, including the possible loss of principal.   All opinions and views constitute our judgment as of the date of writing and are subject to change at any time without notice.  Investors should consider the investment objectives, risks, charges and expenses of the underlying funds that make up the model portfolios carefully before investing.  The ADV Part 2A document should be read carefully before investing.  Please contact a licensed advisor working with Weatherstone to obtain a current copy.  Weatherstone Capital Management is an SEC Registered Investment Advisor with the U.S. Securities and Exchange Commission (SEC) under the Investment Advisers Act of 1940.  Weatherstone Capital Management is not affiliated with any broker/dealer, and works with several broker/dealers to distribute its products and services.  Past performance does not guarantee future results.  The Dow Jones Industrial Average is a price-weighted index of 30 actively traded blue chip stocks, primarily industrials on the New York Stock Exchange and the Nasdaq.  The index cannot be directly invested in.