Playing Chicken with a Global Recession

As we have been going through this year we have regularly discussed the challenges that we are seeing from an increasingly evident global slowdown.  We have seen the risks steadily rising and several policy responses from Central Banks around the world.  With the stakes for investors in equity markets being very high, I want to spend some time this month discussing the risks, potential rewards, and the impact the economic environment has had on our historical and current positioning for our equity-oriented portfolios.

As 2012 began, we had a market environment where financial markets were rallying based upon the belief that quantitative easing programs (unconventional monetary policy used by Central Banks to stimulate economic growth) announced in the second half of 2011 would help to reignite economic growth and stabilize the European financial crisis.  While these actions did provide a modest stabilization in economic growth and did reduce the risk of a “Lehman style” systemic banking crisis in Europe, it has yet to provide any significant impact on economic growth.  As a result, we spent the first half of the year with low equity exposure while hedging much of our equity positions due to the risk that stock prices would be unable to sustain their gains once it became apparent that the actions of the Central Banks were not having the desired impact on economic growth.  We saw that correction begin in late April and wipe out most of the gains made by the global stock markets as we moved into early June.

After a nearly 10% decline from late April through early June, pessimism had built to a level that has historically been more favorable for stocks.  An additional favorable factor in the macro-environment was the decrease in signs of financial stress among European banks.  These factors resulted in modest increases in equity allocations, but the continuing economic deterioration and a more attractive risk/reward profile in bonds has kept us from moving heavily into equities since that time.

The risk in terms of the economic deterioration even in the face of easing by the Federal Reserve is that we had a similar environment in 2006-2008, but instead of a housing crisis that was unraveling, this time it is a sovereign debt crisis in Europe.  It is also instructive to look back and remember that from September of 2007 through early May of 2008 the Federal Reserve cut interest rates seven times, and initiated or increased programs aimed to stabilize the banking system four times.  During this time the stock market declined nearly 20% and then regained much of the lost ground as people became increasingly confident that the actions of the Federal Reserve and other Central Banks would stabilize the economy.  When it became apparent that was not going to be the case, markets resumed their downward decline and it turned into the largest stock market decline since the end of the great depression.  The parallels with 2006-2008 are strong, and the ability of the Federal Reserve to stabilize the economy is by no means certain.  Two examples of the type of deterioration we are seeing are shown in the action of U.S. shipments by Federal Express and Global Purchasing Managers Index readings. 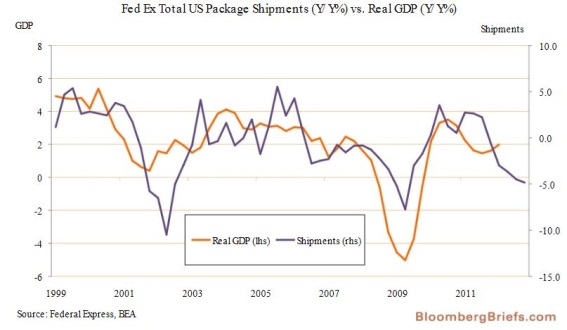 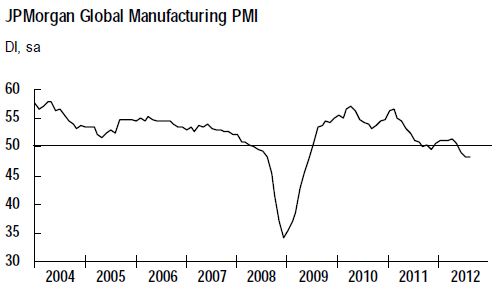 Current action shows investor willingness to believe that the recent steps taken by the Federal Reserve and other Central Banks from around the world will be able to avert a recession better than they did in 2007-2008.  However, based upon the parallels with 2006-2008 and the increasing risk we see for a global recession, it is unlikely that we will see the equity portion of the portfolios move to a fully invested position for more than a few weeks at a time.  In addition, bond and hedging positions will continue to be used in the portfolios until the economic risks are reduced.  This is based upon the profile of the data that we are seeing, the pattern is much more similar to an economy moving into a recession rather than an economy that is bottoming and coming out of an economic slump.

With a stock market that is close to normal valuation, (although higher in valuation than most global markets) upside would be expected to be moderate if we are able to avoid a recession, or at least a deep recession.  This is in contrast to the spring of 2009 when valuation was below average, and extreme levels of pessimism had already priced in a severe economic decline.  If the current environment deteriorates into a recession, then it would be reasonable to expect an accompanying bear market in line with the historical magnitude of -27%, although it could be shallower if economic growth begins to rebound quickly, or it could be deeper if Central Banks appear to be ineffective at providing enough monetary stimulus to turn around the recession.  Only time will tell how this situation turns out, but over the extreme market and economic cycles of the past decade the strategy of aligning our investment positioning based upon intermediate-term risk profiles of the economy and market has served us well although it has been uncomfortable at times to be conservative when markets are moving higher, or when we allocate more heavily to markets when the current outlook appears to be bleak.  As always, our goal is to take market risk when we have a good probability of being rewarded for doing so, and being cautious when the reward is not worth the risk that you would be taking.

Opinions expressed are not meant to provide legal, tax, or other professional advice or recommendations. All information has been prepared solely for informational purposes, and is not an offer to buy or sell, or a solicitation of an offer to buy or sell, any securities or instrument or to participate in any particular trading strategy.  Investing involves risk, including the possible loss of principal.  Foreign investments are subject to risks including political and economic instability, inflation, deflation or currency devaluation and government limitations.  All opinions and views constitute our judgment as of the date of writing and are subject to change at any time without notice.  Investors should consider the investment objectives, risks, charges and expenses of the underlying funds that make up the model portfolios carefully before investing.  The ADV Part II document should be read carefully before investing.  Please contact a licensed advisor working with Weatherstone to obtain a current copy.  Weatherstone Capital Management is an SEC Registered Investment Advisor with the U.S. Securities and Exchange Commission (SEC) under the Investment Advisers Act of 1940.  Weatherstone Capital Management is not affiliated with any broker/dealer, and works with several broker/dealers to distribute its products and services.  Past performance does not guarantee future results.