The market action over the past few weeks has been downright awful.  In fact, if you look at the performance over the past four weeks, with the S&P 500 index down -16.47%, it is the 9th worst four week performance since 1951.  In looking at the eight cases that were worse, one was in the aftermath of 9/11, three were during the stock market crash of 1987, and the remaining four were during the financial crisis of 2008-2009, not an illustrious group to be associated with.  Overall we have been pleased with how our directly managed portfolios have fared during this time, with significant amounts of cash or hedging in our portfolios to reduce the impact of the declines and to be available for purchasing investments at attractive levels when conditions improve.

In our past few quarterly investment commentaries I have talked about the danger that has been growing as we have had one of the strongest post-recession stock market rallies since the end of WWII built upon what can be considered the weakest economic recovery since WWII.    Seeing the markets react as they have over the past few weeks is not a surprise, because many of the investors moving into stocks over the past couple of years are doing so because of extremely low interest rates, which makes for an uncomfortable choice between being safe and earning virtually nothing in money market funds and short term CDs and bonds, or taking on more risk in areas such as the stock market.  Many of these investors are not committed to being invested in the market long-term and are likely to move back into these “safe havens” very quickly if it looks like the likelihood of future stock market gains is in doubt.

Examples of current safe haven investments include gold, silver, and US Treasury securities.  As investors around the world scramble to buy up US Treasuries in times of extreme uncertainty, it pushes the prices of treasury securities up and yields down.  In addition to the private sector increasing their appetite for these low yielding securities, the public sector (the Fed) is using all of its authority to keep these yields at historically low levels.  As a result of the yields on high quality debt securities being at such low levels, investors are left with no option but to look for yield in other places.  This scenario has attributed to the “risk-on, risk-off” trade that the markets have been experiencing as of late summer. 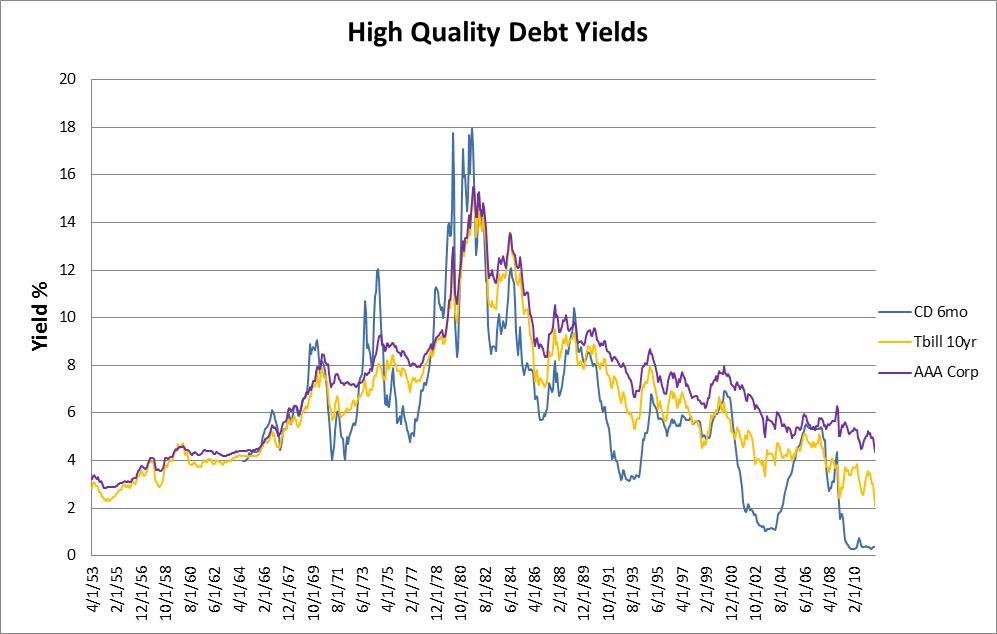 On August 18, 2011 the yield on the Ten Year Treasury Note briefly dipped below two percent during the trading day.  This means that any investors who were buying ten year notes at that time in the day would lend out $78.85 to receive $100 ten years from today.  In addition to the ten year note yield dropping below two percent, the consumer inflation report for July was released on the very same day.  The consumer price index, which is a gauge of consumer inflation, came in at an annualized rate of 3.6%.  In a sense, when you lend money to anyone at a rate below that of the inflation rate, you are actually paying that individual or institution to hold on to your money.  How long this risk-on, risk-off trading environment continues remains to be seen.

When I look at the likely outcome for the current stock market decline, my feeling is that if investors are realizing that the second round of quantitive easing which was begun by the Federal Reserve has been largely ineffective in achieving its stated goals, as outlined in our 1st quarter commentary, then it is reasonable that the markets will give back much of the market rally that began in late summer 2010 at a level of about 1020 on the S&P 500 index.  As of the market close on 8/19/2011 we were already 2/3 of the way there.  If the attitudes among investors changes from the a belief that not only was Quantitative Easing not a success, but that we are now going back into a new recession, then the lows are probably somewhere between the lows in early 2009 and the 1020 level, as shown in the chart3 below.

While I don’t have a strong feeling as to where the end of this actual decline may be, I think it will be a very interesting few months ahead of us and we will probably see some very attractive buying opportunities coming along that are likely to be beneficial to our future portfolio returns.

Source:  1Yahoo finance adjusted close historical data.  2High Quality Debt Yields data can be found at: www.stlouisfed.org  3Reuters.
Opinions expressed are not meant to provide legal, tax, or other professional advice or recommendations.  All opinions and views constitute our judgment as of the date of writing and are subject to change at any time without notice.  Investors should consider the investment objectives, risks, charges and expenses of the underlying funds that make up the model portfolios carefully before investing.  The ADV Part II document should be read carefully before investing.  Weatherstone Capital Management is an SEC Registered Investment Advisor located in Denver, Colorado.  Past performance does not guarantee future results.