Signs of Trouble for Municipal Bonds?

In late 2010 Meredith Whitney, who made her reputation by warning that large banks were in serious trouble long before the 2008 financial crisis, created quite a firestorm by stating that there was a coming financial meltdown in overleveraged state and local governments. Since that time, although there have been isolated incidents of bankruptcies from cities such as Detroit and Stockton, CA, there has been nothing significant on a state level. However, the recent events taking place in Puerto Rico may indicate that municipal debt problems are beginning to move beyond the local level, and we believe are important to be aware of and monitor.

On October 15, 2013, the Government Development Bank for Puerto Rico hosted a 3-hour webcast to soothe investors with its fiscal and economic development plans in response to its falling municipal bond prices that have lasted for several months. Governor Alejandro Garcia Padilla said that Puerto Rico will do everything to honor all its commitments. Puerto Rico municipal bond prices rallied after the webcast. However, the S&P Municipal Bond Puerto Rico Index has still experienced a decline of 15.77%  this year as of Nov 13, making U.S. muni bond funds (MBFs) with at least 5% Puerto Rico exposure suffer from an $8.3 billion net asset loss in 2013 . This makes people wonder what happened to this self-governing commonwealth. 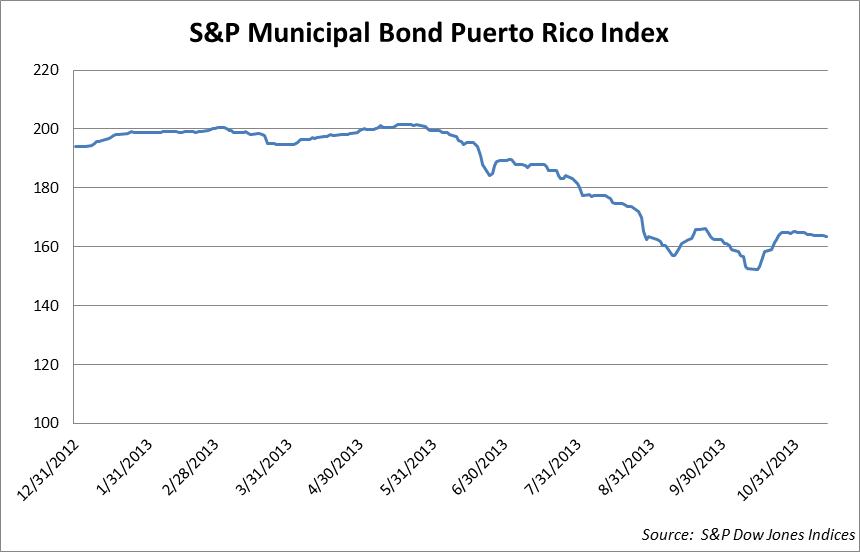 It might be surprising to some people that the small tropical island of 3.7 million people can influence the $3.7 trillion municipal bond market. Puerto Rico has $70 billion debt outstanding, almost four times Detroit’s $18 billion debt that led to the city’s bankruptcy. Puerto Rico’s debt to income ratio is 89%, much more than the national average 3.4% . According to Morningstar, Puerto Rican bonds are held by 77% of MBFs. 180 mutual funds-representing more than $100 billion in assets-have more than 5% of their assets in Puerto Rican bonds.

Puerto Rican muni bonds have been so popular because of their “triple tax-exempt” status, which means they are exempt from federal, state, and local taxes that leads to their relatively high tax-equivalent yields. Even though high yields are an attraction, the spike in yields may spook investors and lead to massive sells. This is what happened earlier this year. The bond market selloff in May and June, caused by investors’ fear of the upcoming Federal Reserve tapering, contributed to boosting bond yields and reducing bond prices. Detroit’s file for bankruptcy in July alerted investors to the hidden risk of municipal bonds, encouraging investors to further reduce their muni bond holdings. A Barron’s report on Puerto Rico’s fiscal and economic problems in late August fueled investors’ concern on the default of its muni bonds with just-above-junk ratings. Their liquidation of positions pushed up yields and drove down prices significantly, making more investors believe that Puerto Rican bonds would collapse. The selling snowballed and quickly converted the territory’s 7-year borrowing spree into a debt woe. Yields rose to more than 9%, making it hard for Puerto Rico to repay its debt or refinance.

Behind the bond market mess are Puerto Rico’s long-term fiscal and economic problems. In 2006, the phase-out of a federal tax break for corporate income made many companies leave the island and Puerto Rico has been stuck in a recession since then. As people lost jobs and tax revenue shrank, Puerto Rico hoped to stimulate its economy by debt financing. Then it found out the municipal bond was popular among investors and it was easy to raise capital through bonds. With the help of Wall Street, which has collected $880 million for bond sales since 2000 , Puerto Rico has enjoyed a borrowing spree to fund its fiscal deficit and growing government payroll as well as repay former debts, rather than invest in productive projects to improve the economy. This unreasonable economic structure discourages business. As many young and educated people migrate to the U.S. mainland for better hiring opportunities, the economic situation worsens.

The latest economic data is not encouraging: unemployment rate around 14%, $1.29 billion projected budget deficit in fiscal year (FY) 2013, pension fund only 7% funded, population down 4% since 2004 and economic output down 16% since 20044.  However, the Puerto Rican government is taking every possible measure to address its fiscal challenges and jumpstart is economic growth. The $1.29 billion deficit in FY2013 was reduced from $2.375 billion in FY2012 by raising tax revenue. The government projects its deficit to be reduced to $820 million in FY2014 and to be eliminated by FY2016. Comprehensive pension reforms have been undertaken to ensure pension obligations are on a pay-as-you-go basis. Public corporations have been turned into self-sufficient businesses. Meaningful spending controls have contributed to reduce expenditure and government payroll. In addition, Puerto Rico is executing an aggressive economic plan that is expected to result in new job creation and tax revenue generation.

Despite government’s efforts, investors are still worried about a downgrade or default of the Puerto Rico bonds. Actually Puerto cannot afford either one. A downgrade to junk bond rating could force selling from bond funds that are statutorily mandated to only hold investment grade bonds. A default would scare away investors and shut Puerto Rico out of the debt markets. Either way Puerto Rico would lose the access to the debt markets, the financing channel it has relied on for so many years. As a territory, Puerto Rico cannot file for bankruptcy and there is hardly a federal government bailout on the table. It has decided to help itself, and the best way so far is to keep its investment ratings and make its debt payment. Puerto Rico’s problems have smoldered for decades and cannot be solved overnight. The government’s efforts and determination to fix its economic problems should help build faith among investors.

On the other hand, some hedge funds believe that Puerto Rico muni bonds have been oversold due to negative headlines. The commonwealth is rated investment grade according to underlying credit fundamentals but has been traded as junk bonds. They maintain that government actions to honor the constitution that prioritizes debt payments with tax revenue have been overlooked by anxious investors. With the belief that bond prices have reached the bottom, over the last few months hedge funds have been buying Puerto Rico bonds.

Puerto Rico municipal bonds are definitely a higher risk investment right now, but some classes with stronger credits may deserve consideration. For example, sales-tax revenue bonds, backed by sales taxes collected in Puerto Rico, have a better rating than many U.S. corporate bonds. In late October, their yield went down below 7% , a sign indicating increased investor confidence.

Puerto Rico has a long way to go to revive its economy and pay down its debt. However, the government’s comprehensive measures and positive attitude to honor its commitments may be recognized by investors, have a positive effect on the municipal bond market, and provide a good example for how highly indebted states can get their finances back in order. If Puerto Rico is unable to overcome the problems facing it, then it will be important to watch the impact that this may have on the confidence of municipal bond investors in highly leveraged states such as California and Illinois. If a crisis of confidence begins to spread to these states, we may see a new chapter in the debt crisis. While this is not a high probability outcome, it is something that will be important to watch.

Disclosure: Opinions expressed are not meant to provide legal, tax, or other professional advice or recommendations. All information has been prepared solely for informational purposes, and is not an offer to buy or sell, or a solicitation of an offer to buy or sell, any securities or instrument or to participate in any particular trading strategy.  Investing involves risk, including the possible loss of principal.   All opinions and views constitute our judgment as of the date of writing and are subject to change at any time without notice.  Investors should consider the investment objectives, risks, charges and expenses of the underlying funds that make up the model portfolios carefully before investing.  The ADV Part 2A document should be read carefully before investing.  Please contact a licensed advisor working with Weatherstone to obtain a current copy.  Weatherstone Capital Management is an SEC Registered Investment Advisor with the U.S. Securities and Exchange Commission (SEC) under the Investment Advisers Act of 1940.  Weatherstone Capital Management is not affiliated with any broker/dealer, and works with several broker/dealers to distribute its products and services.  Past performance does not guarantee future results.  The S&P Municipal Bond Puerto Rico Index is a broad, market value-weighted index that seeks to measure the performance of bonds issued within Puerto Rico.  The index cannot be directly invested in.