Sorting Through a Sovereign Default

The volatility seen in the stock markets this year has been quite high with very little to show considering the roller coaster-ride that investors have had to endure.  You don’t have to watch the financial news for very long to realize that there is a magnitude of challenges facing the financial markets right now.  Today we face a slow-growing domestic economy in danger of slipping back into recession, sovereign debt issues plaguing the European markets, and debilitating political gridlock in Washington D.C.  In this issue of Market Insights, we will look at the Russian default that occurred in 1998.  We will first compare the events that led up to the Russian default to the current financial crisis in Europe, and look at similarities among each event.  In addition, we will look at the impact of the crisis on the United States stock markets.

There are some striking similarities between the current environment and 1998 during the time period surrounding the sovereign debt default by Russia.  Both the debt and equity markets have performed in a similar fashion as each crisis unfolded.  With regard to sovereign debt, the root causes of the Russian financial crisis were an artificially high exchange rate between the ruble and foreign currencies, a chronic fiscal deficit, and a weakening economy due to lower oil and metals prices.  This scenario led to investors fleeing Russian sovereign debt, and as a result, interest rates skyrocketed to as high as 150%(1).  As a result, the International Monetary Fund was forced to step in and provide loans that allowed short-term bonds to be swapped into long-term Eurobonds.  Within the current European financial crisis, the yield on 1 year Greek bonds has risen to 212%(2).  As a result, in an attempt to combat the spike in yields, the European Central Bank has made large purchases of Greek bonds.  The performance of the Greek equity market, since the crisis began to unfold, also has resemblance of the Russian equity markets performance during its crisis. Through the first eight months of 1998, the Russian stock market lost 75% of its value and on August 17th, 1998 the Russian government devalued the ruble, defaulted on its bonds, and declared a moratorium on payments to foreign creditors(1).  With regard to Europe, the Greece stock index has dropped by over 55% from its 2011 highs(3).  The similarity in performance of the United States stock market during these two crises is just as remarkable.

If we look at the impact of the Russian financial crisis on the stock markets in the United States, in 1998 the Russian crises caused the market as measured by the S&P 500 to decline by 19.3% and retest the low about seven weeks later before rebounding sharply through the end of 1998(3).  Looking at the current European crisis, in 2011 we saw the S&P 500 decline by 19.4% and retest the lows about 8 weeks later before rebounding sharply(3). The chart below compares these two time periods. 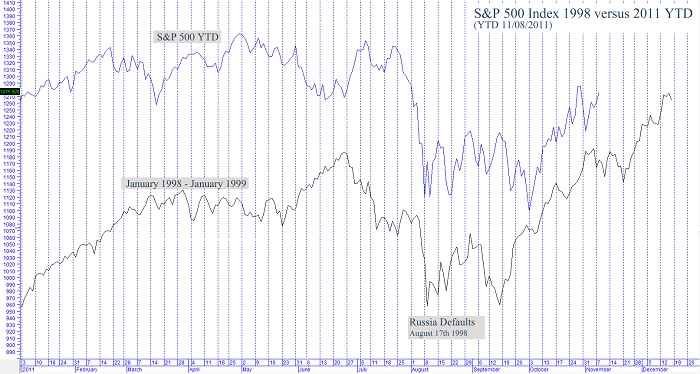 Data for chart retrieved from Reuters

Whether the stock market will be able to continue to follow the path of the 1998 stock market remains to be seen.  One significant difference between the two time periods is the economic backdrop in 1998, both domestically and in Europe, was much stronger than it is today.  A number of forecasters are determined to jump to the conclusion that the problems in the European Union will automatically return us to a crisis similar to the one experienced in 2008.  However, it is useful to evaluate the similarities and outcomes of the events of 1998 before jumping to this conclusion.  As always, we will continue to closely monitor developments and make adjustments to investment portfolios as needed.  With equity markets around the world experiencing significant declines of 15% to 35% during the summer and high levels of pessimism building up, the potential for a new advance has been building.  After reaching new lows for the year in early October, many stock markets from around the world have been moving sharply higher over the past few weeks.

While the economic backdrop remains quite challenging, there are a number of our risk measurement indicators that are signaling reasonable odds for at least a moderate stock market advance at this time.  As a result, we have increased equity exposure to index-based exchange traded funds that track the S&P 500.  We have also added exposure to areas that pay above-average dividends.  In addition, we have added positions in high yield corporate bonds within our equity portfolios.  Although this may seem somewhat unusual within an equity portfolio, the recent market selloff is also impacting corporate bonds.  The yield difference between high yield corporate bonds and treasuries has widened up to attractive levels with yields on high yield bonds reaching 8%.  In a slow growth environment, these yields look relatively more attractive than many areas of the equity markets.  For the international portfolio we have added our largest allocations to both emerging markets and emerging market bonds with smaller positions in some country specific funds.  We have been slower to add to the international positions due to the higher amounts of volatility that we have seen in those areas.

Disclosure
Information provided comes from independent sources believed reliable, but accuracy is not guaranteed and has not been independently verified.  The opinions expressed are those of the portfolio management at Weatherstone Capital Management and not to be construed as investment advice or offer to buy/sell a security, or a solicitation which should only be provided by a qualified financial advisor prior to entering into any investment that involves risk.  Investment decisions should be made based on investor’s specific financial needs, objectives, goals and time horizon.  All opinions and views constitute our judgment as of the date of writing and are subject to change at any time without notice.