On June 4th, 2012 Bill Gross, aka the “Bond King,” tweeted: “Global Bond Markets are turning Japanese, I think they’re turning Japanese, I really think so.”  Mr. Gross was referring to the similarities between the Japanese bond market and other international bond markets which include high debt levels, extremely low and at times negative real interest rates, and most importantly government intervention in bond markets.  The latter will be the primary focus since there is a direct correlation between low interest rates and the amount of government intervention within a country’s bond market.  This becomes apparent once you dig into the Japanese bond market and find out how they can finance a deficit that is twice that of any developed country with record low interest rates.

Investors, central banks, and governments have all been concerned with debt levels within European countries and even the United States.  The International Monetary Fund (IMF) is projecting a debt to Gross Domestic Product (GDP) ratio for the U.S. and the Euro area to reach 111% and 92%, respectively by 2013.  This compares to a projection of 240% by 2013 for Japan (1).  Knowing that debt to GDP is one of the main determinants of the ability for a country to repay their debt, one would suspect that Japan is the riskiest country followed by the U.S.   However, this is not the case. 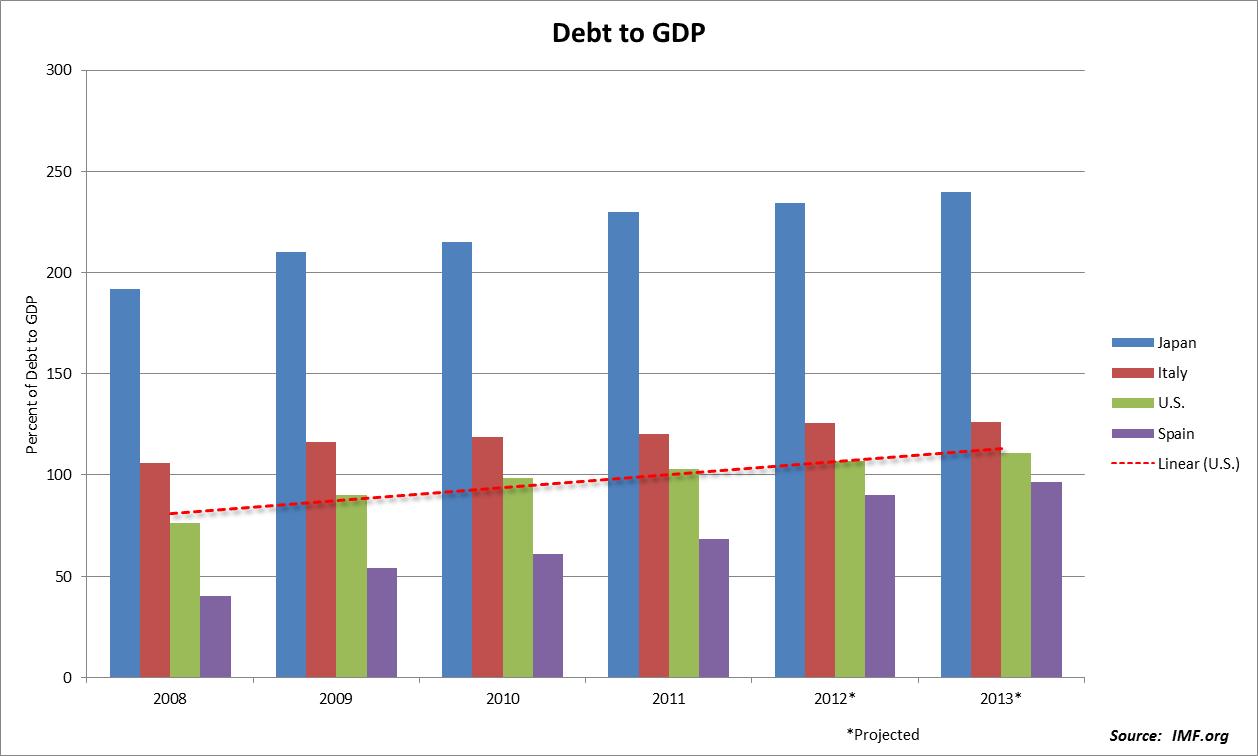 Interest rates are the primary indicator for the riskiness of a government’s debt and Spain is reaching levels that have forced countries such as Greece into crisis.  From the beginning of 2011 through March 2012, foreign investors decreased their Spanish debt holdings from 40% to 26%. (2)  As a result, the yield on the Spanish 10-year note rose above 7%, a level that is considered unsustainable for Spain’s solvency. (3)  Just like an individual who has poor credit and sees their interest rate on their credit card jump from 12% to 25%, it will only be a matter of time until they cannot make the minimum payment.  However, in Japan, the interest rate on Japan’s 10-year government bond has not gone above 1.1% for over a year, yet their debt to GDP ratio is twice that of Spain. (3)

In Japan’s case, over the past two decades the Japanese Central bank has crowded out foreign investors through government intervention by purchasing Japanese Government Bonds (JGBs).  By doing so, they are able to avoid the credit crunch caused by foreign investors dumping their bonds when the investor’s feel like the country’s debt level or political uncertainty has reached levels that are not in line with the rate of return.  This scenario is outlined in the chart below. 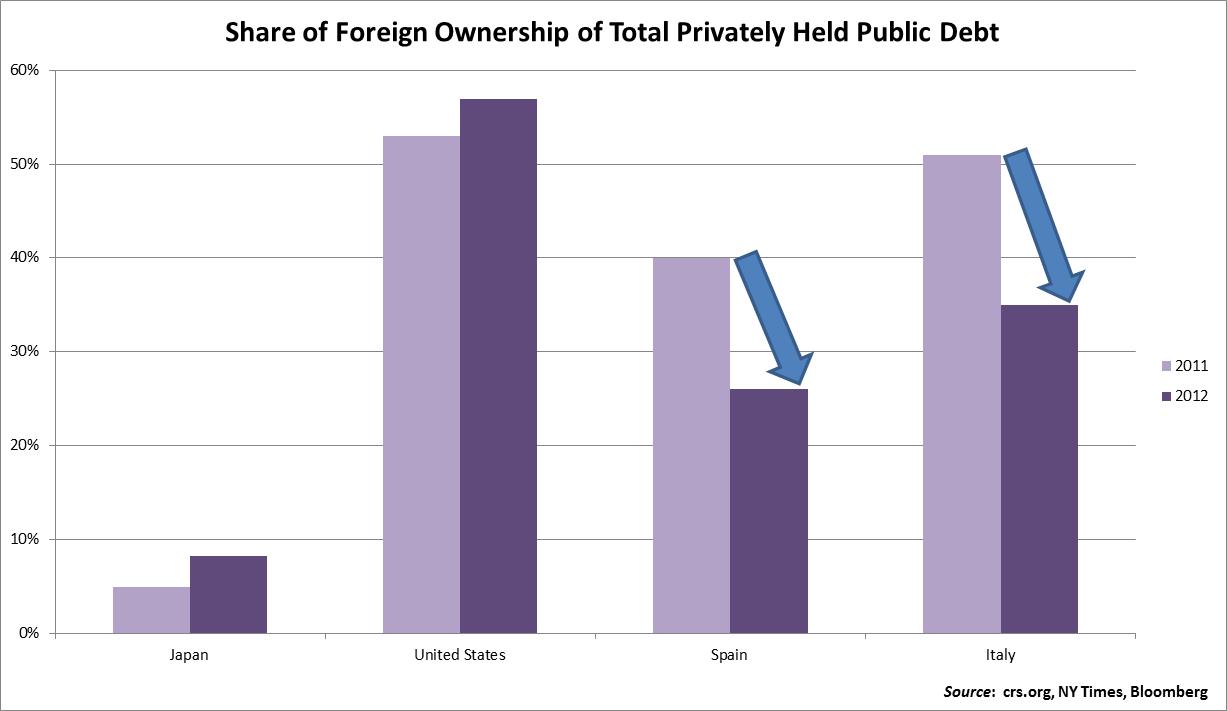 A recent paper from the IMF outlined the following scenario in Spain.  “If the outflow of foreign investors continues, like seen at the end of 2011, then you could see non-residential (aka foreign investors) investments drop to zero.” (4)  Japan’s non-residential investments hovers around 5% during stable market conditions.
Who has been buying the Spanish bonds as foreign investors dump them?  The European Central Bank (ECB) has been indirectly buying them.  The ECB provided 3-year loans to the Spanish government.  First, the ECB lends money to the Spanish government which then channels the funds to its banking sector who in return are “encouraged” to purchase Spanish sovereign debt.  In addition to the 3-year term on the ECB’s loan to Spain, additional provisions prohibited the bailout fund from having the lasting dramatic effect that investors have been looking for.

The multi-stage illustration above clearly shows that the European Union is still lacking the ability to access its debt markets through direct intervention.  I believe a more effective strategy would be for the ECB to do outright purchases (red arrow in diagram) of Spanish government bonds directly with limited provisions with regard to the amount of purchases and holding period. The U.S. and Japan have proven that they can take the necessary steps to preserve calm within their bond markets.  Even though our fiscal situation is facing a “cliff” the interest rates on U.S. treasury bonds continue to stay near record lows.  You can see from the foreign ownership chart above that the U.S. has a large percentage of foreign investors.  Foreign investors know that the U.S. stands ready to “do whatever it takes” and that we can actually do whatever it takes and it’s not just jawboning.

Turning Japanese does not come without its risks.  First, since nearly all of Japanese debt is owned domestically and is seeing a zero to negative real return, Japanese investors and savers are the losers.  This is apparent in Japan’s GDP per capita which has been stagnant over the past 20 years.  Secondly, the demographics will be a significant risk to Japan’s ability to hold down yields over time.  In 1980, 23.5% of the Japanese population was between the ages of 0-14 and 9.1% of the population was 65 years old or more.  In 2010, this data reversed course with 13.2% of the population between the ages of 0-14 and 23.1% of the population 65 years or older.  This compares to a U.S. population with 12.8% over 65 years old.(5)  Projections by the Health and Welfare ministry are that 40% of Japan’s population will be 65 years old or greater by the year 2060.(6)  That’s a lot of retired Japanese citizens looking to cash in their bonds one day.

How “Japanese like” the U.S. and other developed nations become remains to be seen.  We do believe that the probability for a pro-longed low interest rate environment has increased over the past year.    In addition, the probability of an inflationary environment, as seen in the 1970’s has decreased.  Such is the case in Japan, the savers have been the losers during this low interest rate environment and will continue to be as long as rates remain at suppressed levels.  Just as Japan led the way for governments to intervene in government bond markets, they will lead the way if and when the bond bubble bursts.  As the demographics in Japan continue their shift towards an aging nation, the JGBs will see increased volatility.  At some point, Japanese citizens will be ready to retire and will need to cash in their JGB’s to retire comfortably.  When this happens, the Japanese government will have to come up with the funds or you could see some very upset Japanese bond holders.

Opinions expressed are not meant to provide legal, tax, or other professional advice or recommendations. All information has been prepared solely for informational purposes, and is not an offer to buy or sell, or a solicitation of an offer to buy or sell, any securities or instrument or to participate in any particular trading strategy.  Investing involves risk, including the possible loss of principal.  Foreign investments are subject to risks including political and economic instability, inflation, deflation or currency devaluation and government limitations.  All opinions and views constitute our judgment as of the date of writing and are subject to change at any time without notice.  Investors should consider the investment objectives, risks, charges and expenses of the underlying funds that make up the model portfolios carefully before investing.  The ADV Part II document should be read carefully before investing.  Please contact a licensed advisor working with Weatherstone to obtain a current copy.  Weatherstone Capital Management is an SEC Registered Investment Advisor with the U.S. Securities and Exchange Commission (SEC) under the Investment Advisers Act of 1940.  Weatherstone Capital Management is not affiliated with any broker/dealer, and works with several broker/dealers to distribute its products and services.  Past performance does not guarantee future results.