U.S. stocks remained on unsteady footing as the bout of volatility that’s gripped global financial markets persisted amid signs that the rise in Treasury yields has yet to run its course.

Pressure Wednesday came from a weak 10-year note auction, sending the rate toward the four-year high that days ago sparked the biggest equity selloff in seven years. Stocks swung between gains and losses throughout the session before ending lower after heavy selling in the final 15 minutes of trading. Volume on U.S. exchanges topped 9 billion shares for a fourth straight day after surpassing that total just once in the past seven months.

The S&P 500 erased a gain that reached 1.2 percent at its highest and closed lower by 0.5 percent in the biggest reversal since 2015. The Dow Jones Industrial Average swung 500 points from peak to trough, and heavy selling in megacap technology shares pushed the Nasdaq indexes to losses of at least 0.9 percent. While the Cboe Volatility Index eased back from levels last seen in August 2015, at 26.84 it remains about 40 percent above its average since 1990.

“When the rates began to move higher today seemed to be when the selling started to pick up in the market,” Michael Ball, president and lead portfolio manager of Colorado-based Weatherstone Capital Management Inc., said by phone. “That’s a long-term concern that’s out there. After the waterfall decline we had on Friday and Monday, people are just hyper-sensitive.” 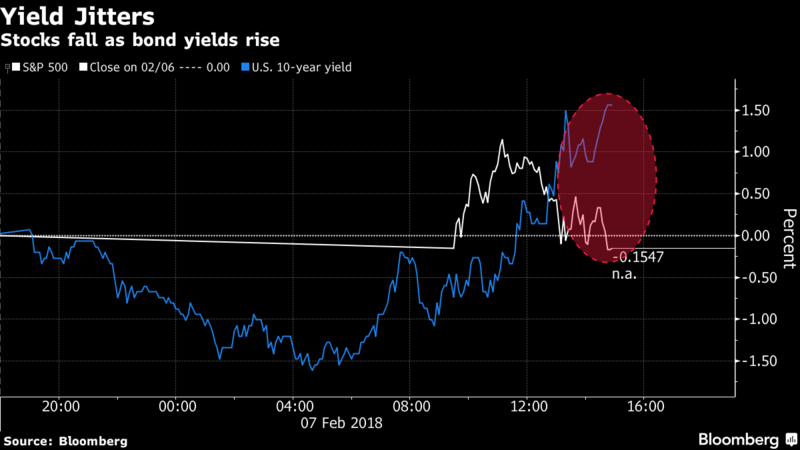 The U.S. equity decline signaled that Tuesday’s rebound — the S&P 500 had its best day in 15 months, as buyers picked over the wreckage from Monday’s 4.1 percent rout — might not persist into the Asian open. The region’s bid for its own recovery faltered late Wednesday, with the MSCI Asia Pacific Index almost completely erasing a gain of as much as 2.4 percent. Europe proved an outlier, with shares halting a seven-day slide on the biggest rally in nine months.

For more on this week’s market turmoil:

A lingering issue for equity bulls is the wisdom of doing what they always do — buy the dip — when more selling by speculators may be imminent after Monday’s break in volatility markets. Accounts of losses and liquidations at hedge funds specializing in the asset class were rife Wednesday morning even as Wall Street strategists urged investors to consider the market’s solid underpinning in economic growth and earnings.

“I think it’s telling you that people are still unnerved about the past several days,” David Ader, chief macro strategist at Informa Financial Intelligence, said by phone. “The stock market is going to be reacting to this retreat, to higher yields, until the bond market finds a footing.”

The dollar rallied, adding to pressure in commodities. Bloomberg’s index of materials fell for a fourth day with its biggest drop since November. West Texas intermediate crude declined the most in two months after government data showed a jump in production. Gold futures slid and copper futures tumbled more than 3 percent.

Here are some key events scheduled for this week:

Terminal users can read more in our markets blog.

These are the main moves in markets:

— With assistance by Sarah Ponczek